Solar and Storage Northeast is coming up February 19th and 20th. It will be hosted in the scenic seaport district of Boston. The conference will be put on be SEIA and SEPA, two incredible organizations. All proceeds from these conferences go directly to support the expansion and development of the solar energy industry through SEIA and SEPA’s year round research and education, and SEIA’s extensive advocacy efforts. We are so grateful for SEIA and SEPA’s continued support of renewable energy.

Breiter Planet Properties is headquartered in Boston, Massachusetts and this conference is right in our backyard. The vast majority of our projects under development are in the northeast region. In fact, 453 of our deals under development are in Maine, New Hampshire, Vermont, Massachusetts, New York, Connecticut, and Rhode Island. We are developing and investing capital into solar projects in the northeast, and we are so grateful for all of our industry partners and customers who are working with us in the transition to a clean energy economy. Part of the reason the northeastern states are such hotspots for solar is because of state policies and incentives. We know that solar friendly policy drives development, and policies against renewable energy can go a long way to hinder solar development. So we are appreciative of the states and legislators who put together the policies and incentives that drive solar development. At Breiter Planet Properties we are able to leverage these policies and incentives to structure unique deals that work for all of our customers in the northeast, the rest of the United States, and around the globe.

At our home base, Massachusetts, we have some of the most progressive solar policies in the United States. Massachusetts has the SMART (Solar Massachusetts Renewable Target) program. “The tariff based incentive is paid directly by the utility company to the system owner, following the approval of the application by the Solar Program Administrator.” (Mass.gov) SMART is a comprehensive program with adders for storage paired generating systems. Another policy in Massachusetts is the Clean Peak Standard. “The Massachusetts Clean Peak Energy Standard is currently under development and will be designed to provide incentives to clean energy technologies that can supply electricity or reduce demand during seasonal peak demand periods established by DOER.” (Mass.gov) Solar plus storage is one of the best ways to meet clean peak goals. Check out our blog on peak demand for a little more info: Peak Demand

Up north in Maine, we are developing quite a few projects. Maine is an example of just how important legislature and policy are when it comes to renewable energy. Governor Paul Lepage was in power from 2011 to 2019. While in favor of offshore drilling in the Gulf of Maine,he was strictly opposed to the development and deployment of solar and wind energy, thinking it would harm Maine’s tourism industry. Now the office has been turned over to Janet Mills, who is ready to enliven Maine’s renewable industry. “Mills has lifted a moratorium on the development of wind energy that her predecessor had put in place. And in a sharp change of tone, Mills says she wants solar panels installed on the roof of the governor’s official residence in Augusta.” (Maine Renewable Policy) With this new solar czar in office, look for more friendly policy and an upswing of deployment moving forward! Our experience in the burgeoning Maine solar market allows us a unique understanding of how to effectively take projects through the development cycle.

New Hampshire and Vermont are also both involved in solar plus storage. In partnership with the Public Utilities Commision and Liberty Utilities, The Granite State (New Hampshire) is implementing a pilot program where Tesla power walls will be installed in 200 residential homes. If the powerwalls prove successful in cutting peak demand from the utility companies, the program will be expanded to more homes throughout New Hampshire. (Utility Dive) 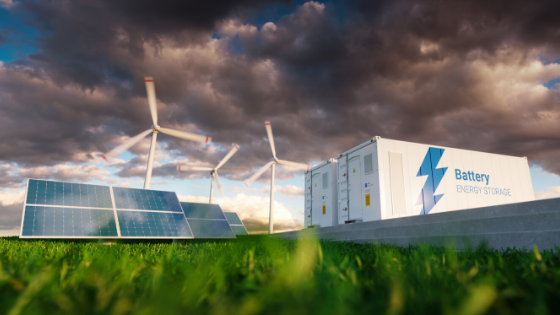 Right next door in Vermont, there is another exciting storage program going on. Green Mountain Power, the largest electric utility in Vermont, has partnered with Tesla to provide customers with solar powerwalls to households. These powerwalls are able to store energy and decrease stress on the grid during peak demand times. They also provide resilience in the face of natural disasters. After storms and rain from Hurricane Irene devastated Vermonters in 2011, Green Mountain Power committed to increased resilience. Energy storage initiatives like this one provide resilience and keep the lights on in the face of increasingly severe natural disasters.

New York State has some ambitious energy storage goals. They are aiming for 3 GW of energy storage capacity by 2030. With impressive funding, and friendly competition with Massachusetts and other northeastern states, New York definitely has the capability to meet this goal. To meet their solar plus storage goals, New York state has allocated $150 million to bulk projects and $130 million to retail systems smaller than 5 megawatts. (Greentech Media) There is immense capital being funneled into solar plus storage projects in New York. Breiter Planet Properties is well positioned to acquire operating assets as well as develop new solar projects.

In Rhode Island, we find another solar friendly Governor. Gina Raimondo has declared a goal of 100% renewable energy by 2030 for the state of Rhode Island. “Rhode Island expects to meet the order's targets by adding more solar, wind power and energy storage projects and investing in energy efficiency programs.” (US News) More and more states are setting ambitious renewable energy goals, and Breiter Planet Properties is here to help finance and develop renewable energy projects and turn these goals into realities.

Breiter Planet Properties is so grateful to all of our industry partners, SEIA and SEPA, and the northeast states for their support of solar energy. We are uniquely positioned to help landowners, property owners, and business owners save on their electric bills.  We look forward to continuing to contribute to the energy transition in the northeast and around the United States and the rest of the world.