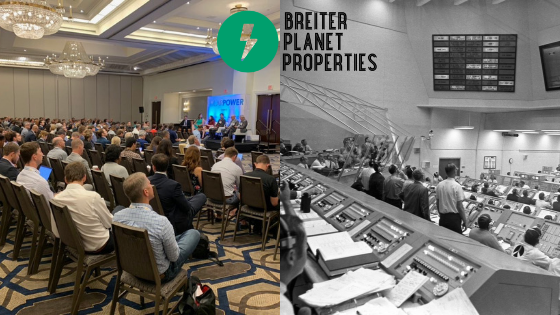 This past week we remembered the incredible achievements of the Apollo 11 team that put the first man on the moon, 50 years ago. CBS, CNN, and other media organizations did a great job covering this with segments throughout the week and specials using the original footage from the historic day/week back in July of 1969.

At the same time, the solar industry gathered for our annual Community Solar Power Summit hosted by the Solar Energy Industries Association and the Smart Electric Power Alliance. The event covered the successes with community solar legislation, while also discussing the challenges that developers face when actually developing community solar projects in specific markets.

While reflecting on the week long Apollo 11 coverage, before I left for the conference and then arriving at the conference, where the room was packed with solar professionals, all coming together to discuss community solar, felt much like a solar “command room” troubleshooting the challenges of our mission to bring solar access to all. We laid out all of our challenges “on the table” and discussed how we can best solve them. We all have a common goal and at the same time, need to be able to bring value to our customers, our partners, our own companies, and our financiers.

We don't have one perfect community solar model or shall we call it “spacecraft,” but one thing that was clear, was that Massachusetts has figured out a model that attracts hundreds of developers and financiers from all over the world, to develop and own community solar projects. Being at 1,600 MegaWatts in program size, it shows a large opportunity for long term development in the state, but at the same time, has its own challenges regarding utility caps, interconnection costs, and utility led studies causing significant delays in the applications of projects. The solution is not Massachusetts’ exact SMART Program model, but rather a combination of the good parts of each community solar state that addresses the challenges faced with community solar in each specific market. Click here for an overview of community solar in New York.

Much of the future of the community solar mission lies in the hands of our state legislators. The solar industry spends just under a million dollars in lobbying which is a minuscule amount of lobbying dollars compared to the pharmaceutical industry, insurance industry, and energy utilities, which collectively spent over nine billion dollars in lobbying. Look at the policies that are constantly being passed in their favor to allow their industries to thrive.  The solar industry clearly needs to increase its lobbying in order to have a bigger influence on the pro-solar legislation which can be passed during each legislative session. It’s very much an investment, among companies throughout the industry, into the future of community solar on a state by state market. Extending the Solar Industry ITC is a good start, but more work needs to be done.

The mission of community solar is at the stage of the Apollo 11 mission where the spacecraft is 120 miles above the earth’s surface, the third stage is ignited, and we are taking the final loop around the Earth, to then be moon bound. Let’s break away from the orbit and line the moon up in our sight, so that we can land on the moon and bring solar access to all!